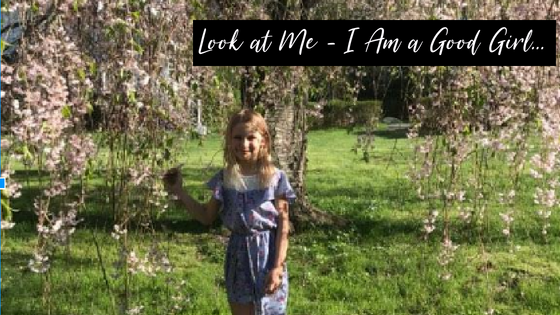 When I was a child…some weird shit went down.
A youth pastor at my church told my mom he could see the devil in my eyes. He told my mother, who told her friends, who told the pastor…word got around and soon enough they were planning an actual exorcism.

(RIGHT? Girl, I have stories for DAYSSSSS – some day I will write a book of just crazy, fkd up shit that you couldn’t MAKE up – LOL)

They took me to an attic bedroom and shut the curtains and did their creepy chants. One woman sounded like she was growling…they scared the shit out of me. If there was a demon – I’m certain it was frightened, too LOL.

They did their stupid exorcism and my mother actually claimed that she flew against the wall when the demon exited. Then everyone left and it was never spoken about (to my face) again.

I know, I know.. LOL.
I do have a point other than a sheer curious story.

It’s not hard to imagine how little 12-year-old me might have made up the story that I was BAD.

FFWD 25 years, 21 years of bulimia later, 25 years of shame and momentum building proof that I am bad.

Now what would you tell me if I told you I get frustrated and angry with myself for trying to prove I am good?

When I compete to be the best to prove I am right.
When I over-give to a crippling degree because I need to save everyone to prove I am GOOD.

What would you tell me?

I am so grateful that I have been in this journey and I get to connect these things. I am so blessed to be healed of the crazy that just is.

This is literally WHY I do the work I do.
To heal THIS CRAZY SHIT all over the world.

It starts here and now.

Sure – come to my next retreat, join the next group coming up so we can connect some shit and heal some shit – but today – it just begins with NOTICING the shit voice that comes up – the self-judgement, the self-criticizing, the guilt and blame.

It literally does nothing but exacerbate the trauma.
You just grew up into a woman who participates in creating the kind of world where trauma turns into self-hate.

So knock that shit off.
We will knock it off together.
You’re not meant to do life alone.
#together

Instead, notice the thoughts and let yourself feel the emotion.
Maybe for the first few times its like breaking the dam loose and letting the tsunami rip – so fkg what.

What comes right after the storm???
Yessss…. Allll the good shit <3

Let’s do this thing together sister.

2 Days Left to Enroll in the Accelerated Coaching Academy’s Prosperous Coach Masterclass!
This intense, deep-learning class will not be offered again until mid-to-late summer.
Click here to set up a call with Team ACA! You deserve it ALL, and you can have it all by being true to yourself – no matter what.

* Clients generated over $55k collectively in this Masterclass Live.*

For the heart-centered human, driven by LOVE…ready to play a bigger game.

I know…. It’s ballsy. But it is what it is. Come double your income.

It doesn’t matter if you are making the lowest you have ever made or you are turned up, healing the world and receiving millions.

Click the button below to join The Daily Raw: A tribe for the entrepreneur, coach, artist and sales person who is here to change the world and ready to do it #together

Any cookies that may not be particularly necessary for the website to function and is used specifically to collect user personal data via analytics, ads, other embedded contents are termed as non-necessary cookies. It is mandatory to procure user consent prior to running these cookies on your website.